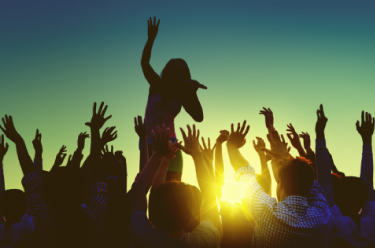 Included in the extensive entertainment lineup are the following performers:

Cucamonga-Guasti Regional Park has amenities for visitors of all ages, including two lakes stocked with trout and catfish, and the Marketplace, which features a wide variety of craft vendors and food stalls.

A favorite of many Huck Finn Jubilee attendees, family yoga is offered on the mornings of October 6th and 7th, and all ages are welcome to participate in this interactive exercise.

Giant games are available as well, such as Ultimate Twister, Giant Jenga, and Giant Connect Four.

Both tent camping and RV camping are available in the Jammer’s Campground, and camping passes are sold on a first come, first served basis. With regard to tent camping, visitors must unload their equipment near the campground and move their vehicles to the appropriate parking area. This is because space for tent camping is somewhat limited, and the festival sponsors want as many people as possible to be able to attend the Jubilee. Barbecues are permitted, and the area has numerous covered pits for both campers and other attendees. However, freestyle campfires are prohibited.

RV camping is situated on a grassy area behind the main stage, and a variety of lot sizes are available. Similar to tent camping, all RV campers must acquire tickets ahead of time, and RV passes are not sold per person, but rather per vehicle. There are no hookups, so RV campers are wise to prepare their unit to be self-contained if possible.

Vehicles are allowed to come and go from the festival provided they have acquired the designated sticker. However, RVs must remain in place or pay a reentry fee.

All restrooms in the park are open and accessible to campers and other patrons throughout the festival. There are also hand washing stations and portable toilets situated at multiple spots on the grounds. There are no on-site showers.

The RV camping section is located adjacent to the “late-night area,” and music fans are encouraged to bring their own instruments and keep the festival going after the last performance. The late-night area may bustle until 1 AM, and therefore campers should be aware that they may hear music and conversation later in the night. As always, service animals are welcome at the festival.