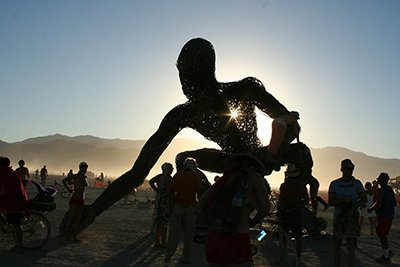 The Burning Man festival was first held in 1986 on Baker Beach in San Francisco, California. Over the last 20 years it has transformed from a small gathering of free-thinking individuals to a 50,000+ grouping of people who come together to acknowledge and celebrate 10 basic tenants of what many consider to be a sort of Utopian society at the festival:

Burning Man has evolved drastically over the years, but the general idea behind the festival has remained the same. Participants camp out, create art, play and listen to music, and express themselves in ways that are all but impossible in “normal” society.

Art found at the Burning Man festival comes in various forms. There is traditional painted art, sculptures, and even “mutant” vehicles. The Burning Man Project is the nation’s largest permitted event on public land, and in 2014 hosted visitors from 68 different countries. The property used for the Burning Man festivals is in the Black Rock desert, which is approximately 120 miles south of Reno, Nevada.

The specific dates for this festival vary each year, but the dates of the festival always fall on the week prior to and including Labor Day weekend. The actual burning of the giant wooden sculpture (i.e. the burning man”) is held on the Saturday night before Labor Day.

Visitors to the Burning Man festival should keep in mind that one of the key points of the event is radical self-sufficiency. Things like food, water and shelter are imperative, and event security staff have even been known to turn people away who do not appear to be aptly prepared. Some people bring the bare necessities, while others show up looking like a walking model from Sky Mall or Sharper Image. You’ll likely want to bring a bicycle or another way to get around the central camp, since motor vehicles are not allowed. Ear plugs are also a good idea, since some festival-goers tend to rock and roll (in more ways than one) all night, and party every day. Attendees are also encouraged to bring whatever expressions of creativity they wish, as long as such expressions do not infringe upon the rights and/or enjoyment of others.

There are no kiosks or general stores located within the Burning Man camp, and the only things available for sale are coffee and ice. You can pay $10 for a shuttle to a local store, but the store has only a limited selection and volume of supplies.

One of the intricacies of the Burning Man festival include the fact that once you are parked at your camping spot, you cannot use your vehicle for transportation for the duration of the event. For this reason, a lot of Burning Man attendees choose to rent an RV or trailer. In fact, RVs have become one of the most common sights at Burning Man festivals in recent years. They allow groups of friends to travel together, which makes the trip even more fun if you’re coming from far away. RVs also provide comfortable sleeping quarters and shelter from inclement weather, including sandstorm-like conditions that have ruined the Burning Man experience for some in the past. There are no power or sewage hookups at the campsite, but simply having the luxury of an RV and its amenities is worth the cost for lots of Burning Man newcomers and die-hards alike. As an added bonus, renting an RV for the Burning Man festival is surprisingly affordable, especially if you split the cost between a few friends and ask for a Burning Man discount.

If you are looking for RV Rentals for the Burning Man Project in Black Rock Desert, we have a huge selection of Camping Trailers, Motorhomes, RV’s, Toy Haulers, Luxury Diesel Pushers, and smaller Class C Motor Homes for rent. All can be delivered to you at Black Rock City, aka “the playa”, for Burning Man. Escape from the dust and the crowds into your own private RV for a moment of calm and quiet, and enjoy a comfortable night’s rest. All RV’s are equipped with housewares for your convenience. Linens and fresh towels are also available upon request. Additionally, your propane and water will be fully stocked upon delivery to ensure you will have everything you need to be clean and comfortable after a full day in the dazzling Nevada sunshine. We are a full service rental company and are committed to making your experience at Burning Man a fantastic one, so if you have any other requests, please ask! Drive safe, and enjoy the journey!